Last launch for the year

This was a great launch today: conditions were good, wind was acceptable, and most flights were successful. There were a few K flights, and one skidmark. One large rocket was reported to have gone past 10,000 feet. I flew a 24mm hourglass rocket on a D15T-4, the Graduator on an E16W-4 (great low slow flight) and a G64W-7, and finally the SNP on the requisite F12J-3. All four rockets flew fine, and I was able to recover them all. Why only 4 flights? Well the pictures below tell the story of what I did with my last hour at the field: 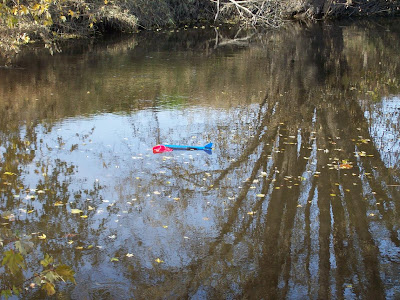 The SNP had a great flight as usual on the F12, it just doesnt get better than this rocket and this motor for a mid power flight. Recovery was going very well, close to the pad. Sadly, it fell directly into the center of the large stream that divides the field. This is a small target and a minor risk, but I was unlucky and hit it dead on. Because this rocket has a large plastic payload tube, it will float indefinitely. There is only one problem: I was unable to reach the rocket. This stream is the size of a small river, and the rocket just would not move from the dead center. At this point, keep in mind that while the rocket was already soaked and probably no good, it contained a 24/40 motor case that costs twice as much as the rocket. I needed to get this case back. 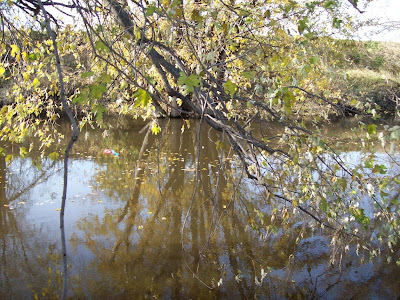 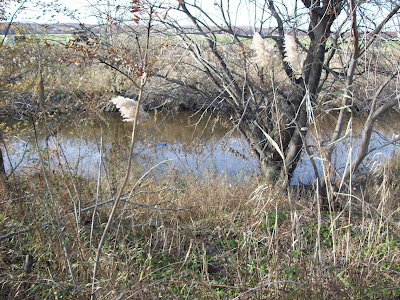 The rocket slowly drifted downstream for about a mile. At this point, I gave up trying and went back to the launch line to pack up. I then drove down the farm parallel to the stream for about a mile or so. I found the rocket floating again. On a whim, I continued to drive to see if there ever would be a snag or eddy or any hope. About 1000 feet up, I found a huge dam made from a fallen tree and much flotsam. A metal drum, a very old rocket, lots of bottles, and a pallet were some of the items I found there: 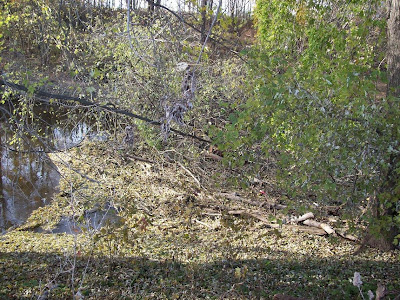 I carefully walked out on this mat of flotsam and waited for the rocket. I should also share that this was hardly a stable platform: it was mostly floating in the water that was 5 or more feet deep and moving rapidly. Further, this water was not a clean stream but farm runoff containing all kinds of fertilizer and pesticides. This was a dangerous situation because falling off would at least mean a very nasty dunking in cold water. But it could have been worse, falling into the center of the dam potentially could kill a person if they could not get back up or out.

Anyway the rocket came and was within reach. I grabbed a long stick and was able to pull it out of the water before it was sucked under the dam (and possibly lost forever). The rocket was waterlogged to say the least, and I threw it out (not wanting to reuse it or deal with cleaning it). The motor case, at $45, is back with me safe and sound. Obviously this was more of an adventure than expected. For the next post I prepared some images of the farm so you can get an idea of what a nice field this is for flying. I am looking forward to next year, and am glad I found this club near me. Let me leave you with a very crappy video of the rocket floating in the stream:

Bummer about the rocket, but I'm glad you got your case back.

Congrats on avoiding a watery death!