Testing a hybrid motor with a spike nozzle.

This is a great project. The hybrid motor uses a solid fuel and a gaseous or liquid oxidizer. Here the fuel is a clear acrylic tube that lets you see inside the chamber. Note how bright it is: the flame that comes out of a motor is often bright, but inside there must be far more radiation.

The spike nozzle, aerospike, uses atmospheric pressure and can help maintain high efficiency. Bell nozzles can only be built for a certain fairly small pressure range (altitude) and then they lose efficiency outside of it.
2 comments

This is a very nice video. It is generally not good practice to fly into or among clouds. The concern is that some aircraft could be inside them. But I personally love cloudbusting. And as this video shows: only by passing clouds can you really get a feel for how fast this (by no means a top performance flight) rocket was going. This was a massive M motor flight.
5 comments 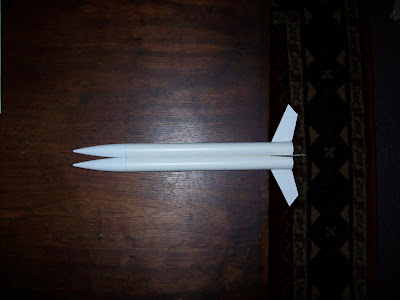 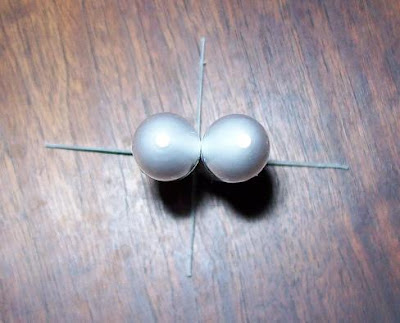 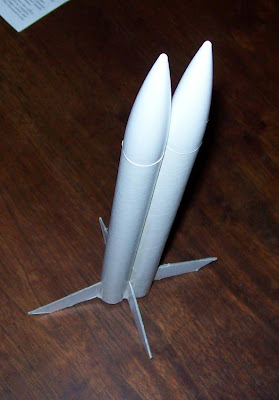 This is a smaller rocket built from the same educators pack of simple kits. Of particular concern with this design is that there will be a large amount of pressure pushing the nose cones apart. This may result in a shred. Large amounts of glue should prevent this.

An interesting problem came up during work on this rocket: I have been using white glue as nose cone weight. I gave literally days for this glue to dry. After letting it dry, I finally put the cones into the rocket. After a few more days, I moved the rocket and found glue inside one tube! It turns out wet white glue is able to melt its way through dry glue like acidic alien blood. This was quite a shock, and called for some further work to bring the rocket back into shape. It can be salvaged, but for the future I must use epoxy.

This rocket will go well on motors from 1/2A up, even two D21s!
6 comments

I recently was lucky enough to get a bunch of rockets and motors. An educator had an Estes bulk pack that he didnt want anymore. My plan is to build three rockets from the set: a 2 x 18mm cluster model, a stretched rocket for staging, and this 3 x 18mm cluster. The bag of motors is just a bunch of A8-3s... so that explains why the cluster designs, I need to find a way to burn those up in bulk.

This rocket has four body tubes, three nose cones, and six fins. To ensure stability, I added a few grams of white glue to the nose cone. The last step will be adding a launch lug; probably a 3/16ths or if not, a 1/4th. CA glue was used for reinforcements, and white glue for the initial assembly. The central tube will eject a small parachute, the outer two (nacelles) will eject a streamer each. Perhaps a short delay on the outer two then a longer delay on the center would be a nice dual deploy of sorts. 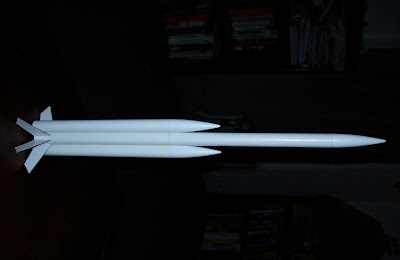 Again I apologize for the lack of images, I generally do not have the time or desire to take pictures during a launch because I am busy flying and enjoying flights! But rest assured, as soon as images and videos are posted to the web page of the local club, I will bring them here.

The launch this weekend was nearly perfect: weather was pretty warm, the sky was mostly clear, and the wind was low (but not quite as low as last time). As usual, many large rockets were present (this club is mostly a high power club), and two M motors were flown along with many K motors. Two large Skidmark motors were in this group, and they were as always the stars of the show. Very few flight failures occured, but the one level three attempt (the first of two Ms) did indeed fail because of a minor recovery mistake, and damage (I think) to the booster. The biggest failure was a ballistic recovery of a large rocket. It fell about 1000 feet behind the range (in horizon zero of the farm), and made a terrible crash sound.

I took my Graduator as a "large rocket" (boy how times have changed), along with the super nova payloader, and some small kits. The graduator flew on a F40T and G71R. The G71 was my first red flame motor, and it was indeed very nice. But the rocket ejection charge was weak (or early), and the parachute did not deploy. The rocket came in very hard with the body tube sticking into the ground. I had assumed that it was never going to fly again, but somehow the damage was very minor.

The SNP flew on a typically nice F12J, and cracked a fin on landing but that also will be easy to fix. Two 24mm art applewhite kits (the orange one and the hourglass one) flew on D motors. Both had strange, unstable flights. Both recovered just fine. Finally, the tiny 13mm paper rocket flew on an 1/2A3! It did very well, but the small parachute did not open: it needs to be modified.

All told, a great launch. Hopefully images to come. Previous launch reports will be updated as well with images.
1 comments