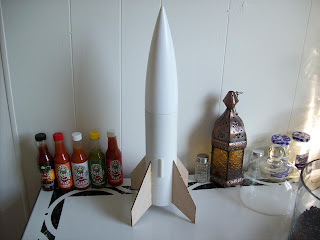 The kit is basically finished, this time far lighter than my first Big Daddy from the late 90s. That kit would constantly break the balsa fins (rockets this fat should use plywood or fiberglass I think), so my strategy was more and more epoxy. But that means more weight (limiting the motors you can use) and actually more fin damage from hard landings. I think going as light as possible might be the best method. This kit is stock weight, then, but will use nylon parachutes and a slightly thicker and longer shock cord than the one included in the kit. Motors from D12 to F39s will fly in this kit.

Small touches of epoxy and paint will come next.

Here is a link to some of the rockets I want to buy next:

I want to buy some cone and hourglass kits, and eventually maybe some monocopters or "helix" kits.

The next launch is about 3 weeks away.
3 comments

I was not able to attend the latest rocketry launch due to several issues (not the least was a huge storm), but my big daddy kit is in the works so the next launch will be one for the record books. (If flying more 24mm motors = some kind of record, which it almost certainly does not.) To pass the time (and keep posting at an interesting rate), I want to share a fun and fairly safe way to make tiny little rockets. I have not done this exact procedure myself, but it appears to work well and is similar to other little rockets. I would suggest someone try a two or even three stage match rocket some time: keep the heads of several rockets close together, with the later stage rockets starting via radiant heat from the previous stage. The upper stage(s) will burn after a slight delay, and will be held in place by a loop below the head, so that they can move forward freely but wont fall off too soon.

1. Take one match and wrap a small piece of aluminum foil around the match-head. Wrap the foil tightly.

2. Make a small opening in the foil wrapped around the match head by inserting the point of a safety pin and bending upward slightly.

3. Bend the paper clip to form a launch pad as shown in the diagrams. Erect the match stick rocket on the pad. Make sure the pad is set up on a surface that will not be damaged by the rocket's exhaust such as a lab table. Several layers of foil on the lab table work well.

4. Ignite the match by holding a second lighted match under the foil until its combustion temperature is reached.

Caution: Be sure the match rocket is pointed away from people or burnable materials. it is recommended to have water or some other fire extinguis[her] available. The foil head of the rocket will be very hot!"
4 comments 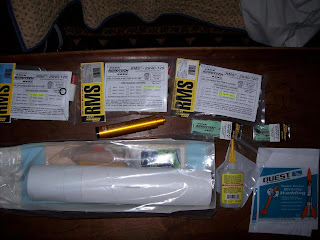 This order has a new 29: 40-120 case, three loads for this case, extra igniters for these motors, a Big Daddy kit, some glue and some wadding. This cost a fair amount of money, but I had hoped to have all these things for the upcoming launch in about 2 weeks. The motors are all Fs: F52-5T, F22-4J, and F40-7W. The F52 should be used in my High Tech H-45 kit, due to the shorter delay on a faster motor (and I want to get this bigger rocket flying again). The other two motors must go on the "heavy" graduator: the F22 is a bit on the low thrust side anyway (again I risk a low altitude but hopefully dramatic flight), and the F40-7 delay time is a bit on the long side for anything but the Graduator.

If I can get the Big Daddy (24mm stubby Estes kit) going in time, it will fly on some of the 24mm motors, or even spare D motors. I am concerned that I wont be able to paint it in time, but it can fly white for a while if I need to. In addition to building it, I will have to prepare the other kits for the next launch as well. Those launch lugs still need to be sanded out, and a paint touch-up might be in order.
1 comments