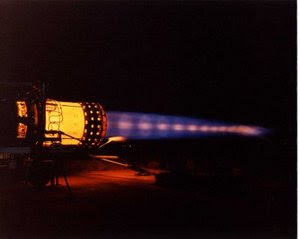 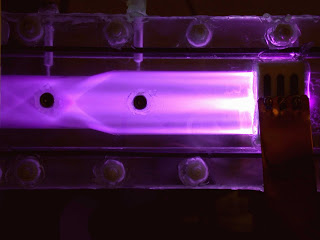 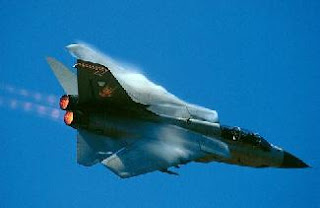 THE PHYSICS OF SHOCK DIAMONDS

Shock diamonds are formed when the exhaust (or any other flow) exits a nozzle supersonically and at a pressure different than that of the ambient atmosphere, i.e., the nozzle is either underexpanded or overexpanded. Because the flow is supersonic, the adjustment to the atmospheric pressure is through waves; these are initially either oblique shocks or Prandtl-Meyer fans. As the waves reflect from the edges of the jet, they change polarity, i.e., an expansion fan reflects as a compression wave and a compression shock reflects as an expansion fan. Thus, both types will ultimately be present. In the above sketch, the nozzle is taken to be overexpanded so that the initial wave system is comprised of oblique shock waves.

Each type of wave will intersect its counterpart originating at the other side of the jet or nozzle exit at the plane or line of symmetry. Because of the symmetry, the intersection can be modeled as a reflection from a rigid wall. It is well known that shock waves may reflect from rigid walls either as a regular reflection or a Mach reflection. The case of a Mach reflection is depicted in the above sketch. In the case of an axisymmetric jet, the Mach stem is a Mach disk which is recognized as the shock diamonds seen in the exhaust of many high speed aircraft.

Because of repeated reflections and re-reflections, several Mach stems will appear until the disturbances are damped out by viscous effects.

Thats how the pros explain it, I just say the more the better. The best part of a rocket is the flame, lets face it.
4 comments