• A privately funded rocket launches from a Pacific atoll Tuesday
• The rocket reached space but re-entered the Earth's atmosphere after half an orbit because of a problem during the second-stage burn, an entrepreneur said
• Falcon 1 is a 70-foot long, 2-stage rocket powered by liquid oxygen and kerosene
• SpaceX founder Elon Musk was a co-founder of PayPal Inc."

Note the 2nd stage motor nozzle almost instantly start to glow red with heat. Great stuff. Sorry to hear that it didn't make a full orbit, but this was still a great flight. I did notice some significant yaw late into the 2nd stage burn, maybe this had something to do with the lack of performance? Rockets really tend to shake and rattle and yaw and pogo if you don't balance them perfectly. But when you think about it, I would say this was a pretty smooth ride for mach 5, 10, and 15.
2 comments 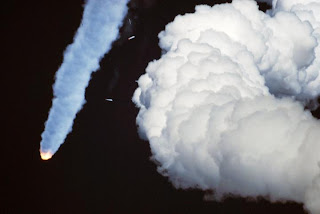 There is nothing like the power of solid rockets, but they cost a ton, are less efficient, and are not so great for the environment.
2 comments

Rocket in a supersonic wind tunnel 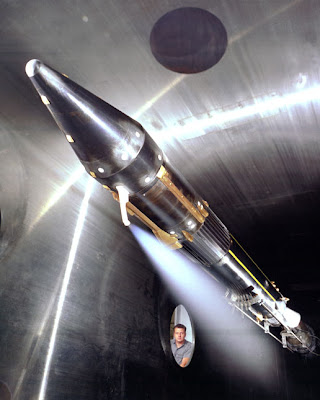 "This 1963 photograph shows vent flowing cryogenic fuel and T/C Rake mounted on a 1/10 scale model Centaur rocket in the Supersonic Wind Tunnel at the Glen Rsearch Center. The fuel being tested is liquid hydrogen. Such tests were conducted to determine how far to expel venting fuel from the rocket body to prevent explosion at the base of the vehicle. The vent is used as a safety valve for the fumes created when loading the fuel tanks during launch preparation. Liquid hydrogen has to be kept at a very low temperature. As it heats it turns to gas and increases pressure in the tank, and, therefore, has to be vented overboard while the rocket sits on the pad."