While I could suggest the Encyclopedia Astronautica for so many reasons, as it is simply the best source for space travel and rocketry that I have ever seen, I thought this was an interesting page. Different proposals for $100 million tourism flights around the moon. That would have been an incredible thing. Maybe if you have terminal cancer it would be a great last voyage to take for that retired CEO or something.

Project 463 remains the largest hobby rocket ever flown, at 1200 lbs. This web page doesnt exactly do justice to the scale of the thing with the small images... But the first and only flight used only a P and two N motors in the lower stage, and one N in the upper.

NCR (Out of Production I think) Phantoms have a long history... By far my largest kit at the time, and still the only 4 inch rocket I have made, the phantom 4000 is made by estes. More than just an upscale of an estes kit, this is a real mid power craft. Able to take up to H motors without any problems, and probably even I motors with some modification (some fiberglassing, some foam, etc). 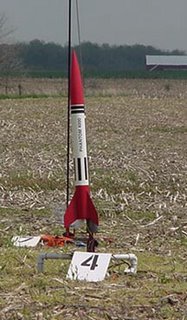 Anyway, this is a great kit, kraft tubes, wood fins, solid plastic nose cone. The elastic shock cord is a probably not a good idea for a 4 inch kit, so think about kevlar or nylon for this... And also, the most important flaw is that the motor mount came ready for a NCR motor at 28.5mm. In other words, NCR forced you to use their motors with these kits. But lucky for us, it is easy to use a 29mm mount to begin with. I didnt know about this at the time, so I had to later convert it to 24mm motors. This still allows for F101 and G55 flights. And D motor clustering (I also added 4 24mm tubes). Goes great on 5 D motors! Anyway, my last suggestion is to start with 29mm. I would have loved to see this thing go on H238s. 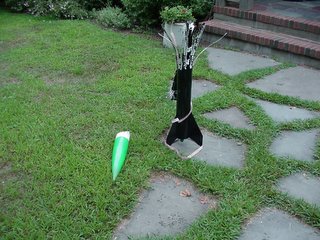 So here is what became of my kit, after several G55, F101, E, and D cluster flights. The final flight came at a time when the nose cone was a bit too tight, and two holes at the base started to leak internal pressure. The ejection charge didnt cut it, and the thing came in ballistic from 750 feet. It hit really hard, the nose cone was hard to pull out of the ground having buried over 5 inches. 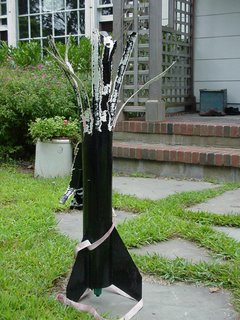 While not really rocketry, high altitude balloons do offer great access to altitudes above 50,000 feet, and can keep a payload up for many hours, which contrasts with the few min. of a rocket flight to the same level. One of the best uses of this is to take images at altitude. 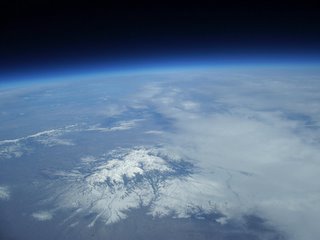 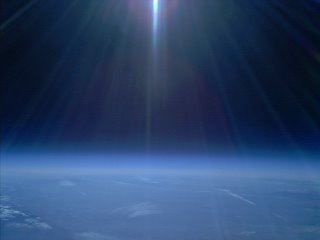 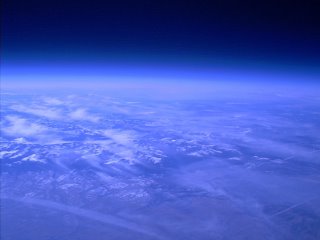 These balloons work with lighter than air gasses, generally either hydrogen or helium. They are mostly simple latex balloons, which are sealed systems. As they gain altitude, they expand a great deal, often as much as a small house. Eventually, however, they burst and the flight ends. More high end flights can use open systems, where excess gas can leave the bottom of the balloon (like a hot air balloon). Anyway, check out the web page. Lots of more images and more detailed info about the hobby. 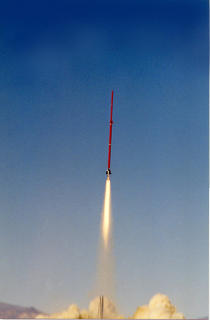 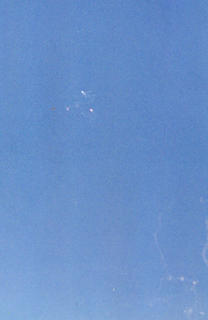 On may 17th of last year, the Civilian Space eXploration Team sent the first amateur rocket into space. After nearly 10 years of attempts, they finally made it. The rocket, an S motor, hit a maximum altitude of about 72 miles, and a top speed of 3,420 mph which is also a record. 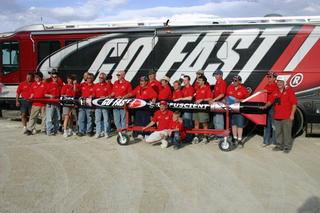 Here you have the team before the flight. The rocket is a couple hundred lbs, but produces 16,000 lbs of thrust at liftoff. Something like a 20:1 thrust ratio. 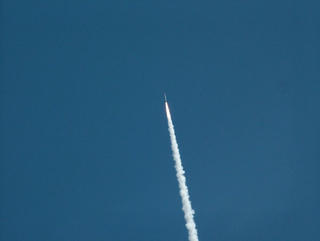 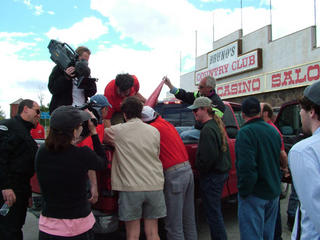 Here they all are back at brunos, which is just about the only place near black rock for 75 miles in any direction. Its a nice place to stay, but is often booked well in advance so call way way ahead if you want to get there. The rooms are small, but the slots are lucky. (I won 50 bucks there last time.) Brunos is the place to be for rocketry. 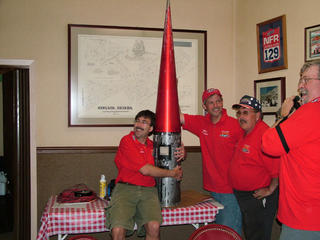 And here you have the end product. The nose cone was all that remained, as the rocket booster had a recovery failure and did a lawn dart (mesa dart maybe?). Flight data were uploaded, and the max. altitude of 72 miles was confirmed.
2 comments

Well here you have some of the greatest rockets ever made. Both are ABM missiles, meaning they are to prevent a nuclear IRV from hitting a target. For this reason, and also because they were the low altitude, terminal defense part of the ABM system, they had to be really really fast. 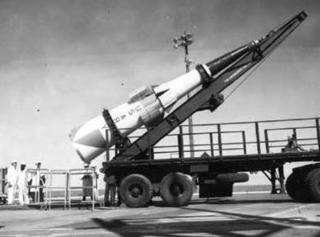 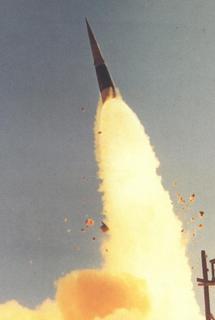 Here is a test flight of the system. It was ejected from an underground silo by compressed gas and a sabot. The nose cone had to radiate incredible amounts of heat: up to 6200 deg F from the frictional heating. Flight time was 15 sec, or less. 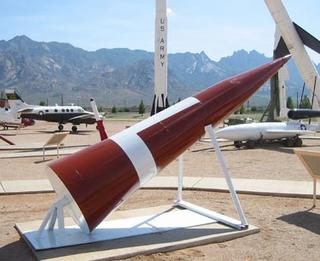 As if the sprint wasn’t crazy enough, there is this little guy. HIBEX, possibly the single most insane rocket ever. It was supposed to target nuclear devices at under 20,000 feet altitude. Now keep in mind, these devices would then be falling towards the target at about mach ten. 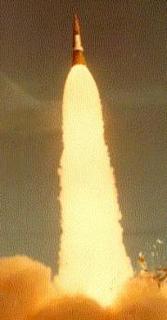 Not as much info is out about this rocket, but it appears to have accelerated at 400 gs, which is just incredible. And it was only 17 ft tall! Flight time was 2 sec., and mach 8 was had after burnout in just 1 sec.

This is a web page with the history of the O-10,000 motor. This high thrust 4 inch motor has been used quite a bit for large projects including the thunderbolt posted below. In addition, Rikki Rocket (of poison fame) flew jurassic kik, which was at the time the largest hobby rocket, on the very same motor.

Here is dr Kosdon near one of the first O-10,000 flights. Note the short nose cone, and shaped fins. The very first flight had the same nose cone, but with squre fins as well. Slowly the performance increased as more attention was given to design of the rocket. 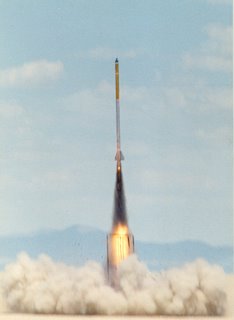 And here is the flight of this motor. This launch was at black rock, NV, and did not recover. Indeed no O-10,000 had been able to recover properly until recently.

Well welcome to my first post. I should start with an intro of my current array of rockets. Here is my collection. There have been many in the past which are gone awol or damaged beyond repair. As you might be able to see, many of these models are in the process of being repainted. So they may not be the best looking rockets out there, not yet anyway. 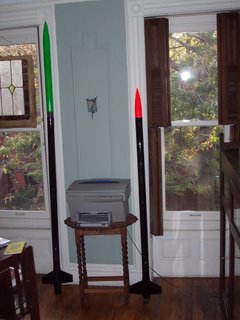 These two are my largest, most high end rockets. Both are custom, made by my design, and both are 54mm min. dia. models. They are based around 54mm spiral wound fiberglass tubing from Giant Leap Rocketry. Each has an acme 54mm fin can (canister), and uses acme launch lugs. Due to damage to the taller model on the left, it was rebuilt with fiberglass and metal rods to add strength. The larger one uses a snap ring motor retainer, again from giant leap (im like a drug addict with them), and the smaller uses electric tape or friction fits (which personally I prefer).

Both have flown: the taller one on the left has been launched two times, both on CES J motors, both attempted level two launches, both failed to certify me. (Ill go into more detail on that another time I think.) The smaller one on the right has gone up a few times, though I forget each motor type, but I motors. Each rocket can fly on as little as a strong H, such as the H-238, or as much as you can fit in there, including an L motor. On an L motor, each will be well over the speed of sound and well over two miles. 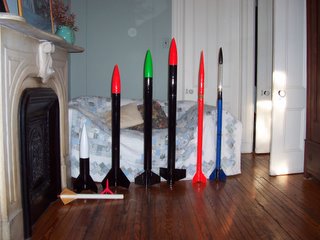 Here is the bulk of the fleet. These are my mid to low power rockets. From left to right, they are:

My model rocket kits, estes big daddy (under construction), my little estes gnome, and part of a custom 24mm model.

Next over, with the green nose cone, is my viper 4, also a LOC kit. This is a brand new 24mm 4 motor cluster kit. It has not yet been launched. First it is going to go on 4 estes Ds. Then I also have two 24mm cases for flights on two f39s or other such combos.

Next is my third LOC kit, and another classic, the EZ H-45. A great great model, similar to the graduator but for 38mm motors as well. This one has been up only once or twice.

The all orange dart is a PML Cirrus Dart. This 38mm dart is all about speed and altitude. It can go up on f or g motors, but put an I in there and you get supersonic and over 2 miles. I have not finished it yet, but it is almost ready!

Finally, my oldest rocket still working, is the super nova payloader from estes. A great kit, out of production right now. This one is fine on D or E black powder motors, but really is built for composite motors like the E15 or F12. It can go on faster motors, but frankly I think it works best with a slow one.

Well that's the collection, there have been far more rockets in the past which are all gone now. Each one represents a fair investment of money and time, and will certainly take more work to finish. After it is all said and done, there is almost a feeling of pride in the rockets when they perform well at what they were made to do.
0 comments

This is a web page to cover rocketry. I participate in Hobby rocketry, and will cover that as well as industrial and government rocketry.
0 comments