Early plans for a lunar mission 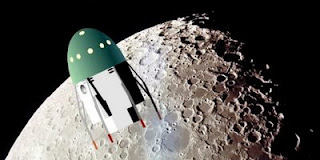 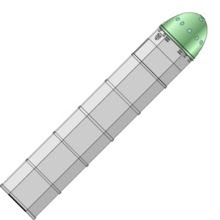 "Design of the British Interplanetary Society's BIS Spaceship began in 1937 and was published in January and July 1939. The purpose of the exercise was to prove that a manned lunar expedition could be designed using existing powder rocket technology. The design was reformulated in 1947 based on information on German advances with liquid propellant rockets.

Available British rocket technology then consisting only of powder rockets, the booster consisted of 2,490 such rockets, which were shed as soon as they were exhausted. Thus a kind of 'infinite' staging was used to compensate for the very low specific impulse of the motors. The hexagonal booster was 6 meters in diameter and 32 meters long, with a lift-off mass of 1112 metric tons. Launch was from a flooded caisson in a high-altitude lake near the equator. The one metric ton spacecraft delivered a crew of three to the lunar surface, landing on gear very similar to those used for the Apollo Lunar Module sixty years later. Following re-entry in the earth's atmosphere, a parachute was used for final descent. Oddly, heating during ascent through the atmosphere was seen as a real problem, while re-entry on return was considered trivial ("accomplished in easy stages" via aerobraking). Therefore a jettisonable ceramic shield protected the spacecraft from heating expected to reach 1500 deg C during ascent, while no heat shield was considered necessary for return.

J Happian Edwards led the design team, which included H Bramhill (draftsman), Arthur C Clarke (astronomer), A V Cleaver (aircraft engineer), M K Hanson (mathematician), Arthur Hanser (chemist), S Klemantski (biologist), HE Ross (electrical engineer), and R A Smith (turbine engineer)."
The ideas here are essentially sound, if highly optimistic. The spacecraft mass would have to be probably an order of magnitude more massive, and the capsule would need heavy shielding for reentry rather than exit of the the atmosphere. Further, it is unlikely that people could survive reentry without a lifting body entry craft, because a direct entry from the moon results in huge G forces like 15 or more Gs.
0 comments 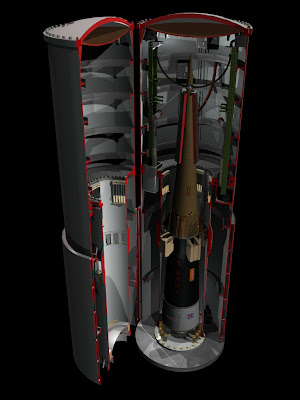 This drawing of a Sprint Silo was located online. It is not known at this time if the details are accurate or not, probably this is an artistic interpretation. What can be seen is a piston or sabot of sorts, probably used to eject the Sprint at high accelerations. Note the double walled, lenticular cover with what seems like a hollow space. Is this to harden the rocket against a nuclear attack? The dome is obviously the strongest shape to resist pressure, though a cone would probably be better at deflecting heavy impulse impacts. Why hollow? Would this space hold water or other materials for radiation shielding?

I now have the source and information about this image. This is an accurate Sprint Silo:

"In the 1970’s, the Martin Marietta Corporation (now Lockheed Martin) in Orlando, Florida, built what is still today one of the most incredible guided missiles ever to fly. The Sprint was a part of the only anti-ballistic missile (ABM) system that the United States ever deployed. Complementing the long-range Spartan interceptor, which was intended to destroy incoming nuclear warheads before they re-entered the atmosphere, Sprint was a short-range screamer with literally split-second reactions. It could intercept any warheads that got past Spartan when they were only seconds from their targets. Ejected from an underground silo by a hot gas generator, the two-stage Sprint accelerated so fast that it would pass a .50-calibre bullet, if fired at the same time, within a second. Atmospheric friction made the outside skin of the second stage hotter than the inside of the rocket motor. It was protected by a thick ablative layer that actually boiled away, carrying the heat with it. Sprint was tested successfully many times at White Sands Missile Range, New Mexico and at the Kwajalein Missile Range in the Pacific. It was beyond-state-of-the-art technology for its day.

This image shows Sprint in its silo. The missile sits on the eject piston, which in turn rests on a ring of springs to cushion the missile from ground shocks. When the gas generator under the piston fires, the piston shoots up the launch tube (stopping when it hits the piston arrestors at the tube mouth) and the Sprint continues out of the cell, literally blasting through the frangible fiberglass, foam and rubber domed cell closure. Tan “wedges” at the missile’s midsection near the second stage fins guide it out the tube. The cutaway shroud near the top of the missile is the “foam sock,” an insulating blanket around the guidance section and warhead that keeps the components at operating temperature at all times."

Aerotech just launched this web page to sell a small number of mid power items at a very low price. They claim this is to 1.) introduce more people to the hobby, and 2.) help us in these hard times. Among other items, they will be selling E15W and E30T motors will be for $18.90 per 3-pack. This is indeed a very good price. If you spend less than $100, you have shipping. More, and shipping is free. 18mm reload cases are going for $30 also. I almost wanted to get one, but will resist. Give the page a visit some time, see what you think.

I personally dont get why they cant sell the 24mm cases and reloads as well. I suspect they dont want to undercut retailers all too much.
0 comments 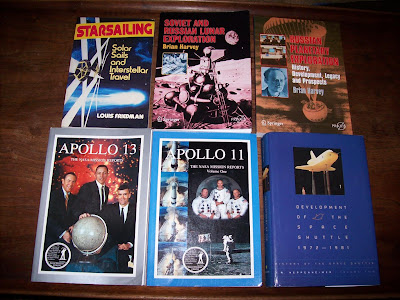 These books are part of the latest Amazon order. Some of them were only $5 shipped... compared to the stamped prices of 15, 20, 25, or more each. Great deals! The space shuttle book is hardcover, and the sequel to one already in our library. The Praxis books are very nice also, I chose Russian topics because that is an area that is not covered very well by other sources. A few more books will arrive shortly.
2 comments 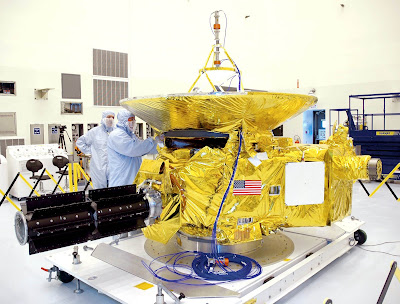 You may have noticed that my icon changed from Cadavre, to the Sprint missile. I may change back at some point, but I wanted to lend some support to my rocketry projects which have been revived considerably during the past year, when compared to the relative lull since 2004. Cadavre may return, but for now it is rocketry stuff. In the spirit of celebrating the new icon, please find below additional images of the Sprint rocket. I have added some basic information so that everyone can be on the same page. Check the link below for my first sprint post. 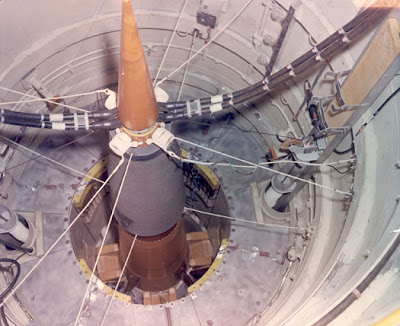 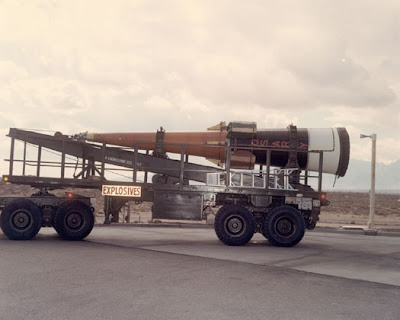 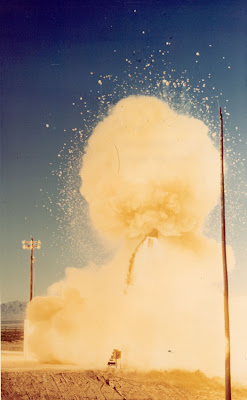 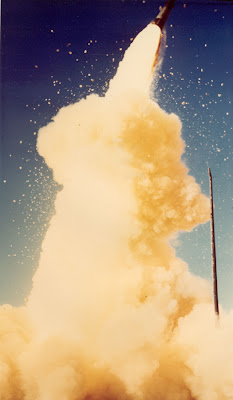 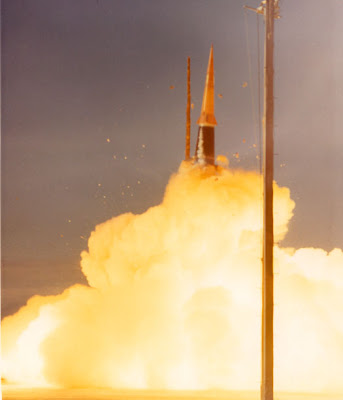 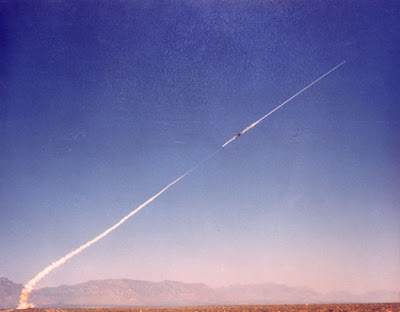 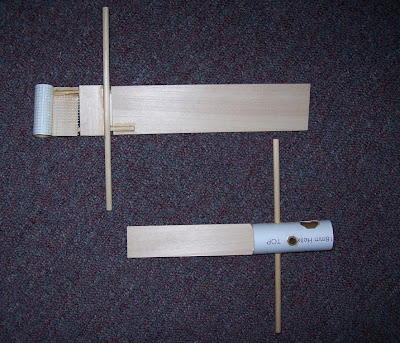 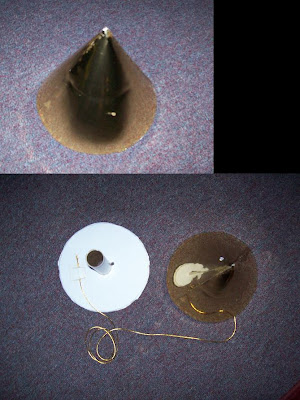 These are the latest three rockets from art applewhite, and probably my last build for this year. The shiny metallic one is a 29mm cone rocket. It breaks apart for recovery. Two helix style rockets were also built. I need to make a special launch pad for them: they launch from a 1 inch long rod, and need a very stable pad that is just at ground level. One is 18mm and the other is 24mm.

Here is a video of a HUGE monocopter rocket.