Shadow Aero sells ultra high level rocket materials, parts, and custom rockets. They used to sell kits, but these kits are no longer made and they sold out. Their work is at the top of hobby rocketry. 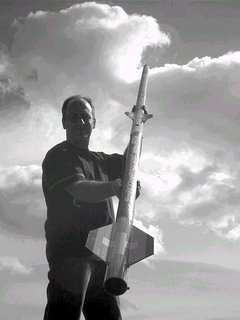 This is a two stage "Shock X2" which is basically a two stage copy of the Shock kit (a ultra high performance, high cost kit). As you see it here, this rocket can fly to a reported 50,000 feet and attain more than mach 3.5 using two L motors. Needless to say, for a rocket this size, that type of performance is insane. Perfect rockets for kosdon thin motors (motors one dia thinner than the typical aerotech motors, for example a 54 mm L or 38mm full J).
6 comments

MARS is a British high power - amateur rocketry group. This project uses a kosdon O-10,000 (can you tell I am a bit obsessed with this motor?) and a boosted dart rocket. The goal first of all was to set a new UK altitude record (which they did) and try to attain altitudes above 50,000 feet.

For those new to this topic, boosted darts are rockets that, due to a lack of any motor in them, can be made as aerodynamic and dense as possible. When combined with a large quick burning booster (which they drop off right away before drag from the booster slows them down) they can attain much higher altitudes than with a rocket that has to carry the O-10,000 with it for the whole flight. For the longest time, a boosted dart launched with an R motor (by RRS) held the altitude record in amateur rocketry.

The flight worked pretty well, however it only attained around 35,000 feet for unknown reasons (they suggest a separation failure). Still an O-10,000 flight that recovers is a success on it's own. They did get the new UK record, despite the reduced performance. The previous record was only 15,000 feet or so.
2 comments